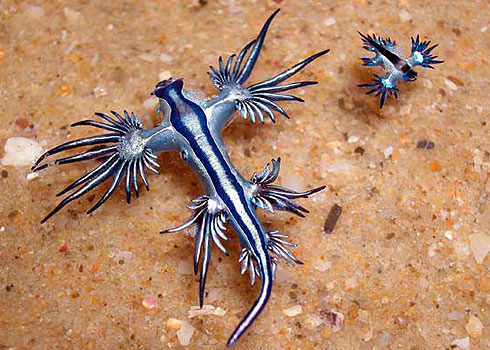 This mysterious animal is the Glaucus atlanticus, or the blue sea slug (“Glaucus” means colour of the sea)

It belongs to an unusual group of oceanic nudibranchs. Nudibranchs belong to the mollusc family, and share many of the attributes that marine snails have, such as a muscular foot and sensory tentacles called rhinopores. The one major structure they are lacking is a shell.

To live a planktonic existence, the blue sea slug has evolved several unique adaptations. The first one is a gas filled sac in its stomach, which helps maintain positive buoyancy. This is very important, because their preferred prey includes surface dwellers such as blue bottles (Physalia), blue buttons (Porpita) and Velella velella, which, not surprisingly, are also blue! These animals are all at the mercy of the wind, and are generally found along the coast by beach combers after strong onshore winds.

The blue sea slug only feeds on the most dangerous nematocysts (or stinging cells) from the blue bottles, and is able to use them as their own defense, but if blue bottles are in short supply, they will exhibit cannibalism.

The muscular foot is located dorsally, as opposed to the normal ventral position. The most interesting feature of the foot is its colour, which offers a striking contrast to the body. In fact, the contrasting colours of the sea slug are very effective in counter-shading, where the animal is camouflaged from above and below. They have up to 3 pairs of cerata, which are used for respiration, defense and digestion (they were once thought to be used as “oars” but this theory has been shown to be incorrect).

These wonderful animals grow to about 40-50mm, and are found around the world from the tropics to temperate waters. They can lay their eggs either on driftwood, or sometimes on the floating skeletons of their prey items, where the young develop until there own air sacs have developed.