These days, when someone talks about worms, we automatically think of viruses affecting our computers. However, this large and diverse group of invertebrates is an important part of the Great Barrier Reef community, and is often involved in complex relationships with other marine creatures.

The term “worm” applies to a number of different phyla (groups), and they are grouped based on their individual structures. Nematode worms are covered in a flexible outer layer, similar in structure to our fingernails, and completely lack cilia for locomotion. Annelid worms, on the other hand, have a more typical “worm” shape, with a segmented body and a distinct head. The classic Christmas tree or fanworm, is a great example. These polychaetes create a tube made of limestone or grainy particles that increase in length as the worm grow. The 2 fans that they extend into the water column are mucus lined and multi-purposed, in that they collect fine particles to feed on, and also extract oxygen from the water. The colours of these fans range from orange and yellow through to blue and white. When danger approaches, the fans are quickly pulled into the chamber, and a hard cover (called the operculum) is pulled over the top like a trap door. 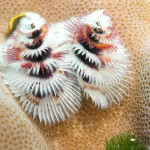 Bristle worms are free living annelids, and are characterized by a series of hairs or bristles arising from each segment of the worm. Some fishermen might know them as blood worms. Bristle worms feed in a number of ways: some burrowing types feed off the organic material as they move through sediments, whilst other more aggressive types have strong jaws and will attack worms and snails. These amazing creatures, like a lot of other worms, can regenerate their body parts if they lose them, even if their heads get bitten off. Some species, like the fire worm, can cause quite a skin irritation if brushed against human skin.

Flatworms are amongst the prettiest of all worms, coming in colours of deep purple, pink and yellow. The bright colours often mimic the colours of toxic nudibranchs, which helps the worms avoid predation. They range from extremely small (less than 1mm!) to up to a meter in length. Most species are rarely seen, due to the fact they live in the sea floor sediments. Lucky for us, however, most of the really colourful ones are about 2-3cm long, and are regularly seen by reef visitors. Some of the larger flatworms can be seen swimming through the water column, and are often confused with nudibranchs such as the Spanish Dancer.

Many polychaete worms species go through a mass spawning event, much like the corals – it makes good sense to maximize your reproductive potential when large numbers congregate together (kind of like the swinging 60’s!). Many overnight dive boats have observed the appearance of millions of worms gathering around the night lights. Often at this stage, the worms have undergone a drastic change in their morphology, developing organs for swimming and sometimes the development of eyes. The resulting larvae exist in the water column for a period of time before descending to the sea floor to start the cycle all over again.