Spring is in the air and as the oceans warm up, more than the birds and the bees will be thinking about reproduction. Corals will also take advantage of the beautiful conditions we expect at this time of the year. Corals have two reproductive methods: asexual and sexual. The asexual process is where the individual polyps split and divide to increase overall size of the colony, and this process occurs continuously throughout the year. However, to maintain a consistently robust gene pool, corals need to have a sexual phase to exchange genes. This process was unknown to science until 1982, when several marine biologists working on the Great Barrier Reef observed it in the wild for the first time.

The time of the mass spawning varies from area to area. On the west coast of Australia it happens around April, in Micronesia it is in July, and on our own Great Barrier Reef it 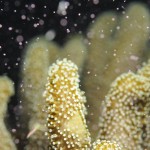 occurs in November to December. As a marine biologist, it is probably the highlight of the year to be able to get out and observe this phenomenon in the wild.

There are a number of environmental cues that the corals rely upon to stimulate them to spawn. Foremost is temperature. The ocean temp needs to be 26oC or above for the month before for the gametes to mature. Secondly, they will generally reproduce 4 to 6 nights after the full moon in November or December, when the tides are “slack”. As opposed to a lot of fish species that take advantage of large outgoing tides to sweep their eggs into the relative safety of open water, corals prefer little water movement so that the fertilized eggs can settle on suitable substrate. Thirdly, it will generally be about 2-3 hours after the sun sets, because it’s nice and romantic, and more importantly most of the planktovores will be asleep, giving the eggs more time to settle to the relative safety of the reef.

The vast majority of corals are hermaphrodites, which means they are both male and female at the same time. On the night of spawning, the polyps begin to expand out of their limestone cups, and bundles of orange eggs can be observed near their oral opening. The sperm bundles are glues to the side of the eggs, and they float to the waters’ surface due to the positive buoyancy of the fat content in the eggs. To reduce self fertilization, the eggs will reject sperm from the same parent, but readily accept sperm from other colonies of the same species. By synchronizing to reproduce at the same time, and putting most of their effort into a short period of the year, helps the corals to maximize their reproductive effort.

As in all natural systems, there are variations on how this process works. Brooding is one such example, where the eggs of certain species are retained in the parent colony, and the sperm has to find its way in. Development of the new coral begins, until the now-formed larvae breaks free from the parent, and literally crawls away and begins to form the first limestone cup around its’ body. From there it will grow into the coral forms that we see and love.

Everyone is aware of the day after coral spawning. There is usually an orange slick on the water that has a certain aroma, and all the planktovores have bulging stomachs from feasting on the leftover, unfertilized eggs, and marine biologists on the reef have got red eyes from staying up all night..