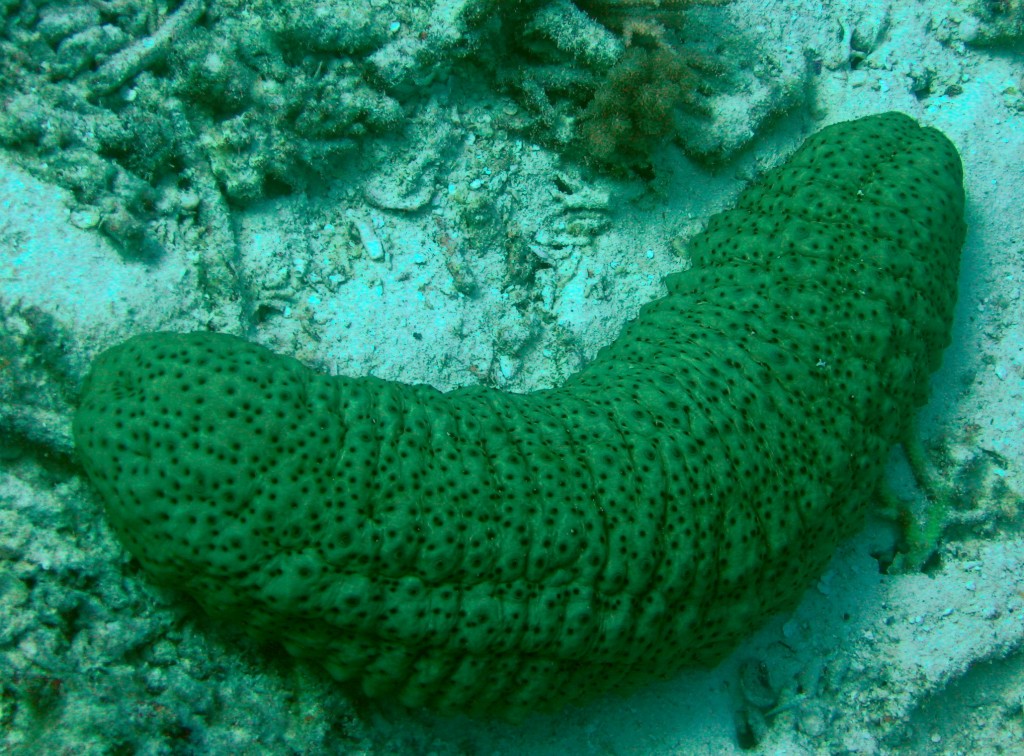 One class of animal that is often overlooked on the reef is the ubiquitous holothurian, or as it is locally known, the sea cucumber. Over 1500 species of sea cucumbers occur world wide, and approximately 200 occur in Australian waters. The Great Barrier Reef is home to some of the most spectacular varieties in the world.

The sea cucumber was one of Australia’s first exports, even before Europeans arrived. There is strong evidence that the Macassans from Sulawesi were collecting them in large numbers, and they have been a traditional delicacy in Asian markets for thousands of years. The animals were boiled and dried in the sun, which made them easier to transport, and were then used in stir fries and soups. They also reportedly have strong medicinal powers, and have been used to treat arthritis, whooping cough and high blood pressure. They are rumored to act as an aphrodisiac, and more recent studies show that collagen produced by the animals could be used be used in anti-aging compounds for humans.

For these reasons, sea cucumbers are under potential threat from over fishing in many places around the world. Some enterprising research currently being conducted has found ways to make them spawn in captivity, and to potentially grow them for overseas markets. This type of research is fantastic, as it not only provides resources for a new industry, but also protects our oceanic stocks from over exploitation.

Sea cucumbers belong in the Echinoderm family, which includes starfish and sea urchins. The relationship of sea cucumbers to these other creatures is not immediately obvious unless you look inside the animal. Starfish are arranged in bundles of five (what scientists call a “penta-radial system”). If you cut a sea cucumber in half, you would see that the outer muscles are arranged in groups of five. Sea cucumbers have sticky white threads that are ejected if the animal is harassed, which could potentially entangle a predator. These threads are also rated as a delicacy in Japan.

These slow moving creatures have an unusual way of obtaining oxygen – they breathe through their anus! Not only that, but they have one of the most unusual commensal relationships with a small fish known as the pearl fish, that also resides in its anus. The fish relaxes in relative comfort throughout the day in the sea cucumber, and then when the animal breathes at night, it emerges to feed on small crustaceans. As dawn approaches, it times its entry, and wriggles backwards back into the holothurian.

Sea cucumbers themselves filter feed the sand for decaying plant and animal material, which they sort internally and the sand is past out the anus. Some have specialized to feed on particles suspended in the water column, and have highly sensitive feeding apparatus. They move very slowly by rhythmic movements of their muscles, or by tiny little tube feet (much like the ones you find in starfish), and live in all conditions from shallow reef waters to deep sea vents up to 3.5km down!

Like all things on the reef, remember to look and observe. Handling can cause undue stress, resulting in the animal eviscerating its intestine, and this can take a lot of energy to replace. The best thing to do is marvel at this fantastic survivor as one of the many characters that form the wonder that is the Great Barrier Reef.