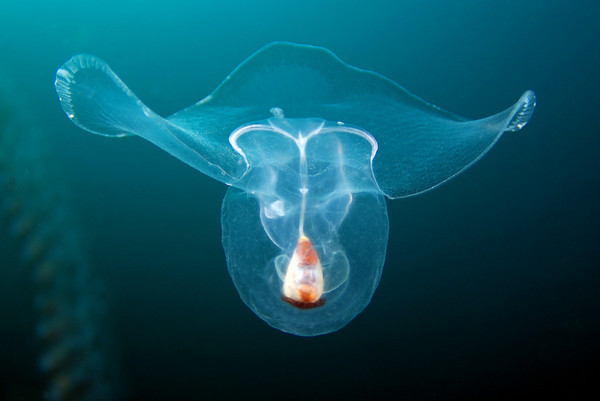 Sea butterflies, or flapping snails, are holoplanktonic mollusks (Mollusca, Gasteropoda), belonging to the suborder Thecosomata (Blainville, 1824). Holoplanktonic means that they are living in the water column between bottom and surface.

They float freely in the water, along with the currents. This has led to a number of adaptations in their bodies. The shell and the gill have disappeared in several families. Their foot has taken the form of two wing-like lobes, or parapodia, which propel this little animal through the sea by slow flapping movements. At times, they just float along, ventral-side up, with the currents.

They are rather difficult to observe, since the shells are mostly colorless, very fragile and usually less than 1 cm in length. Their calcareous shells are bilaterally symmetric and can vary widely in shape: coiled, needle-like, triangular, globulous. These shells are very sharp, and will stick into exposed human skin.

Little is known about the behaviour of sea butterflies. They have a peculiar way of feeding. They are mostly passive plankton feeders, but at times they can be real hunters. They entangle planktonic food through a mucous web than can be up to 5 cm wide, many times larger than themselves. If disturbed, they dump the net and flap slowly away. When descending to deeper water, they hold their wings up.