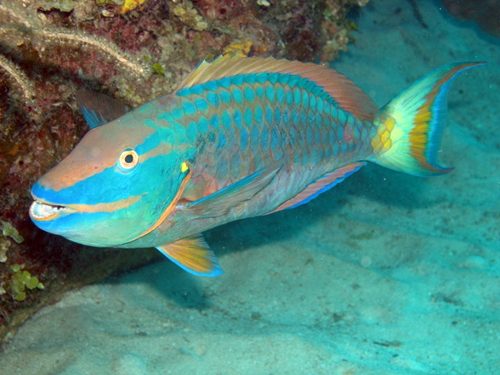 Of the approximately 1600 species of fish along the length of the Great Barrier Reef, the ubiquitous Parrotfish family is probably the most easily recognized. On any given visit to the reef, you are guaranteed to see these magnificently coloured creatures swimming over the coral zones.

There are over 30 species of parrotfish on the Great Barrier Reef, and all share a few common traits. The most obvious of all relates to their teeth. Parrotfish evolved from the carnivorous wrasse family, but through the course of time, their teeth have moved forward on the jawbone and reduced in size. Eventually, the teeth fused together, creating a very useful tool for scratching algae off the surface of the coral. Usually they will scratch a thin layer of limestone off the coral along with the algae, and this helps with the breakdown of the cellulose. Often parrotfish will be seen passing the broken down sand as a fine stream of sediments, and some scientists have calculated that up to 30% of the coral sand you see at the reef is in fact old parrotfish poo! As always, however, there are a few exceptions to the rules, with some of the larger species actually feeding in part on live corals.

Reproduction in parrotfish is usually conducted in one of two ways. Either a group spawning, where there are many more very excited males than females (practiced regularly by the aptly named Sordid green parrotfish), or pair spawning, where there is often an elaborate courtship display, where the male woos the female with gentle brushes of his fins down her side and a sexy dance. A fine example is the superb Bicolour parrotfish. 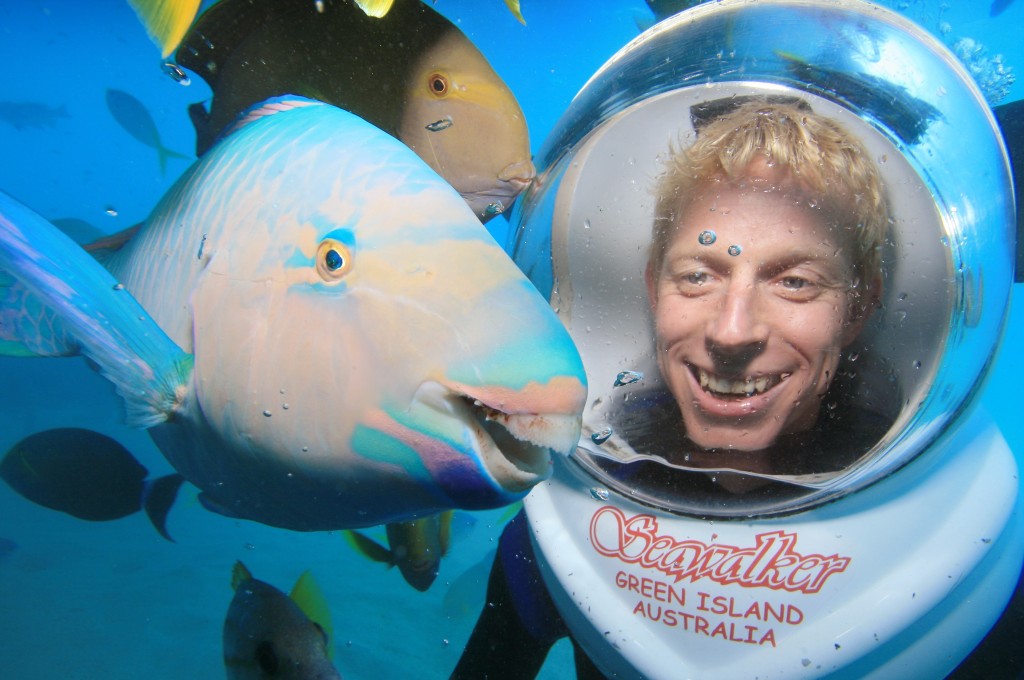 Parrotfish are generally thought to be protogynous, where they are born females, but may change sex to the terminal phase. The reason for this is probably based around population dynamics. One male can produce thousands of sperms to fertilise a lot of females, so there’s not a great need to have plenty of males around. If there is a dramatic loss of males in the local populations, the initial phase females can actually change sex and turn into fully functional males. This is usually associated with a change in colour to the brilliant greens and blues we see daily on the reef.

Parrotfish form large mixed schools, with up to 10 different species of parrotfish, and often other families of fish such as surgeonfish and wrasses. These completely unrelated species often benefit each other, with the parrotfish scratching the surface, sending fine algal strands into the water column, which the surgeonfish swoop on, and the wrasses pick off the disturbed invertebrates.

When parrotfish sleep at night, they often secrete a mucus sleeping bag around themselves to protect themselves from predators. The bags also have antibiotic properties that are beneficial for the fish.